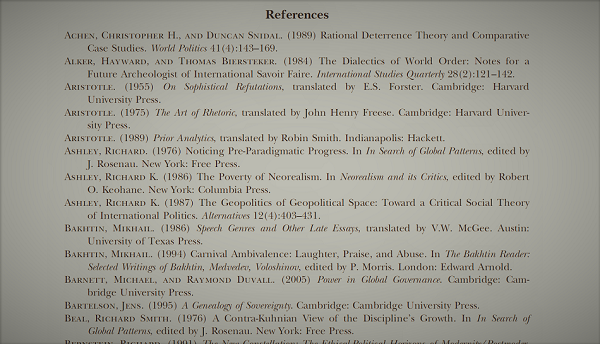 Publishers of academic papers can transform bibliographic references into machine-readable metadata. Such “Open Citations” can, for instance, indicate interlinkages between journals. However, so far only 59% of all journals tracked at OOIR have made their citation data freely accessible.

Scientific papers contain references to other works on which they have built their research. Academic publishers may then transform these bibliographic information into (meta-)data so that the references can be analyzed by humans and machines. If they are freely available, one can speak of “Open Citations”. Such citation data can be crucial to understand interdisciplinary dynamics, or to measure the scientific influence of individual articles and journals; the notorious “Impact Factor”, for instance, relies on such journal-level quantifications of citations.

OOIR uses such Open Citation data to show the interlinkages between journals. For instance, a look at the information about the Journal of European Public Policy (JEPP) indicates that JEPP entertains close scholarly dialogues with the journals JCMS: Journal of Common Market Studies, West European Politics, and European Union Politics. Such data may be helpful to locate a given journal (in this case, the JEPP) in the research landscape, or to find similar outlets that may suit one's interests.

How do Open Citations look like? As they are supposed to be machine-readable for large-scale analyses, the data are highly structured. To take a randomly chosen paper from JEPP (“Getting around no: how governments react to negative EU referendums”), one can use this paper's DOI (in this case, the DOI is “10.1080/13501763.2019.1619191”) to access their metadata through CrossRef's API at http://api.crossref.org/works/10.1080/13501763.2019.1619191. This opens a structured JSON code containing all the scholarly metadata of that paper. This may look confusing at first; to get a better overview, one can copy the code into JSON Viewer and “beautify” it. At line 84 of that code, the value “references” contains the open citations:

Here, the references are listed in terms of DOI. At OOIR, a script loops through all these DOIs, accesses CrossRef's API, and fetches all the metadata of the DOIs referenced so as to identify the year of publication, journal etc. Without open citations, this would not be possible.

40 % of journals have yet to open up their citations

However, not all publishers make their papers' references public in the form of Open Data. Out of 47.6 million scholarly publications, roughly 59% deposit open reference data with CrossRef. These numbers are taken from the latest progress report from the I4OC (Initiative for Open Citations).

How open is the scholarly citation graph today?

Scholarly publications with #OpenCitations data have grown to 59% out of 47.6M articles with references deposited with Crossref.

Talk to your journal editor and publisher and help us get to 100%. https://t.co/fP55NSYJfw pic.twitter.com/kkWw7mD8t6

Of all 786 journals tracked by OOIR, open citations could so far be found from 466 journals. Interestingly, this corresponds to a share equal to I4OC's number – 466 out of 786 journals means roughly 59%.

Among OOIR's biggest publishers (Taylor & Francis, SAGE, Wiley, CUP, OUP, Springer and Elsevier), it is Elsevier which is notably absent with regards to Open Citations. None of its 31 journals at OOIR make references available as open metadata. The second largest publisher without any single Open Citation is Chicago University Press (with 11 journals).

However, even when a publisher generally endorses Open Citations, it does not follow that all of their journals have made them publicly available. This particularly refers to half of OUP's journals at OOIR (31 out of 61). T&F (28 out of 173, or 16%), Wiley (13 out of 79, or 16%) and SAGE (12 out of 119, or 10%) similarly exhibit journals that have not yet opened up their references.

This is regrettable, for the tracking of bibliographic citation data can tell us how scientific knowledge accrues and how a discipline's journal landscape looks like. Journals and publishers are thus encouraged to make such data freely accessible.